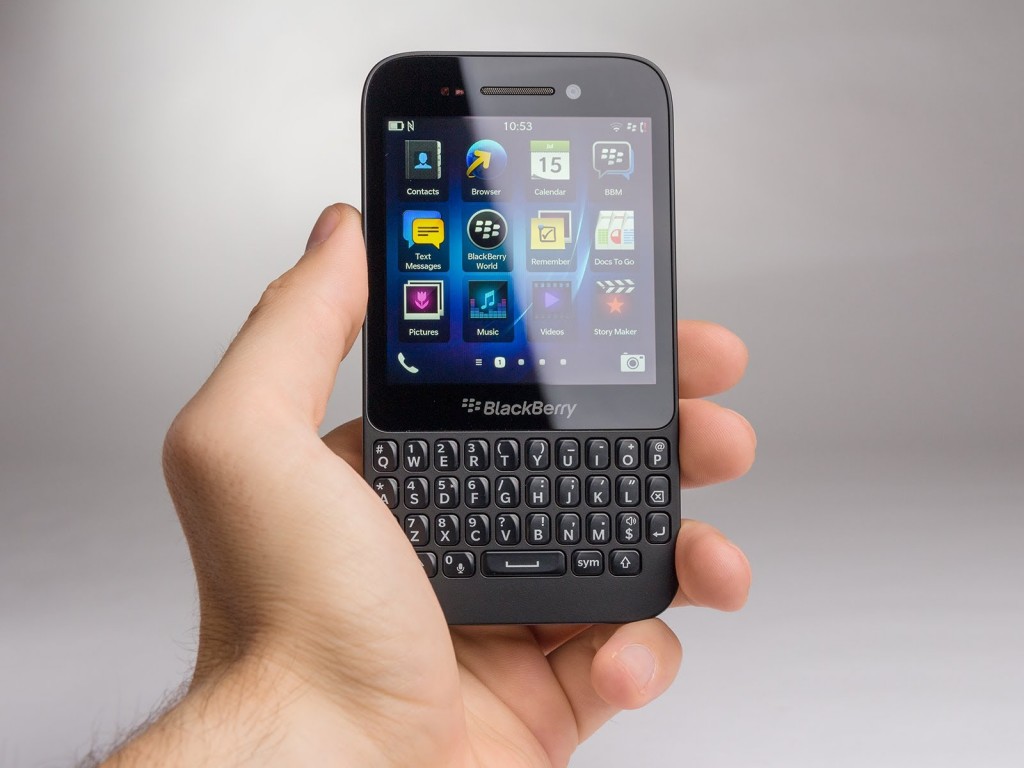 One of the visible differences is the keyboard layout and display treatment. The BlackBerry Q5 has the IPS LCD display with the BlackBerry logo just between the keyboard and the display. It carries more simplistic design with rounded corners and slimmer look giving profile. The Qwerty keyboard covers almost half the area than the screen and still has some plastic layer to space in its chin — for the operator branding in other countries.

BlackBerry is known to experiment with the Qwerty keyboard and same is visible in the Q5. This handset features slightly spaced out individual keys without the stainless steel fret-board lines. In the front side, the Qwerty keyboard is the only oppressed part of the phone and rest area is consistently flat.

The individual keys from Q to Y have surface tilting towards left side and the keys Y to P have towards the right side. Such keyboard design has been implemented considering the constant typing needs of the users. However, the keys are bit hard compared to that on the Q10. Rapid typing with slight pressure ushers the tak-tak sound from the keyboard.

BlackBerry has placed the speaker at the bottom of the phone where the front side panel appears to be meeting the back panel. Most important difference between the Q10 and the Q5 is the back panel construction.

The Q10 has a glass weave bearing back panel cover that gives access to the SIM slot, memory card slot and the battery. But the BlackBerry Q5 has a plastic back panel which can’t be removed. Indeed, it has a non-removable battery.
The SIM card and the memory card slots are located at the left side of the device and a flap is provided to protect those slots. BlackBerry has tried its best to accommodate the flap in the smooth curve of the side so that it does not pop open at slight brush. However, one is required to use nails to open the flap and correctly insert the memory card and a micro SIM. Here is where most will miss correct instructions to insert the SIM and memory card.

The power key is located on the top center, appearing in metallic finish with the silver coloured outlook. The volume control keys rest on the right side with the voice control activation key in between.

BlackBerry Q5 does have several changes in terms of physical design but certainly feels great to the hand for those who have been using Nokia’s Qwerty devices. The matte finish of the back with metallic BlackBerry logo gives decent grip to your hand and makes it comfortable to hold. The BlackBerry Q5 has minimalistic like design which certainly does not make it appear downright cheap.

Display
One of the major differences between the Q10 and Q5 is the display. The BlackBerry Q5 has a 3.1-inch IPLS LCD display panel supporting two finger touch. By default, this display supports the odd 720×720 native pixel resolution and thereby giving a 1:1 appearing aspect ratio. The display has been constructed to support decent viewing angles and big enough to enjoy the BlackBerry 10 OS interface.

However, it goes without saying that the screen has been adjusted to make it more text-friendly and provide readability.

Hardware
BlackBerry has packed a dual-core 1.2 GHz clocked Qualcomm Snapdragon S4 MSM8960 mobile processor in Q5, which is slightly under-clocked than the Z10 and Q10. However, BlackBerry has used 2 GB RAM even in the Q5 which makes us think that it will be the basic denominator for RAM for the BlackBerry 10 OS.

The BlackBerry Q5 features the Adreno 225 graphics chip that makes the phone capable of running most recent games and fair level of graphics details.

Apple Launches Water-Resistant iPhone 7 And iPhone 7 Plus
New Instagram Updates. Like It or Hate It?
Portable Speakers Online: ReSound by Portronics

The first day of Maruti Suzuki Desert Storm rally culminated in zeal and zest for some and in a desire to do better for others.
read more