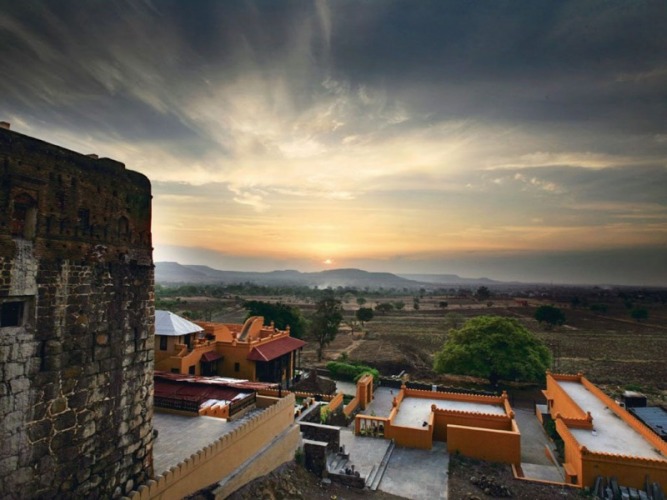 Rajasthan is renowned for its grandeur heritage, culture and hotels. Similarly, Fort Jadhavgadh in Maharashtra is an amalgamation of historical places like ShaniwarWada and Raja Kelkar Museum. Fort Jadhavgadh is a modern luxury hotel located near Pune, built in the early 18th century as a residence of Maratha Sardar, showcasing the grand Maratha history.

The grandeur of Fort Jadhavgadh can be observed by its extravagant appearance, from the wooden floor to the wall and from the main entrance to the stairways. The architecture is simply stupendous and the restoration done is just speechless

There is an entrance fee of INR 500/person at Fort Jadhavgadh, which is adjustable against the restaurant bill. It has a typical royal Indian entrance of its time, as you are welcomed and greeted by Malves in traditional attire (Malves were the Maratha soldiers during the great Shivaji & Peshwa era). 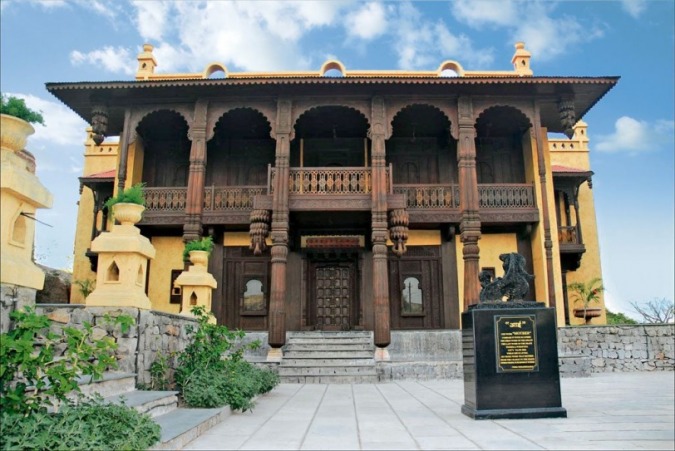 The astonishing wooden main door of Fort Jadhavgadh takes you through a small passage, which used to be a conventional design practice to slow down the attacks of enemies army. Once you enter through the main stairways, you witness line of prudently preserved artefacts, that leads to the primary courtyard, where you get the mesmerizing glimpse of 18th century Maratha heritage in conjunction with the 21st century.

One of the most dazzling aspects of this heritage hotel complex is the Maratha artefacts museum that displays a collection of the owner (Jadhavgarh and the Orchid group) Mr. Kamat.

The museum in Fort Jadhavgadh showcases multifarious objects behind the glass panes, depicting the saga of Royal Martha from 18th to early 20th-century with tobacco pipes, mirrors, nut cracker’s, jewellery boxes etcetera, located just outside the fort. The building of museum offers an incredible view of aristocratic Wada’s of Maratha Sardars that literally gives you the ride of its era by Maratha craftsmanship.

Chhajja :- Sitting in the Chhajja (balcony), is a pleasant experience. It is a place in the fort where the king and queen used to sit to feel the romanticism for hours with each other on swings. 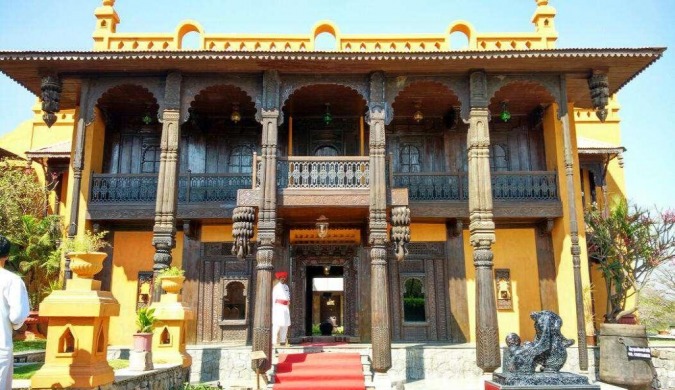 Converted in round the clock dining restaurant decorated in a subtle style, similar to the fort, it’s a Jharokha sit out that offers the experience of lavishing green farmland of Jadhavgarh.

Payatha :- Payatha is a Marathi word, which means something that is situated at the foothills of the small hillock. It’s a dinning fresco restaurant popular for its sublime evening and conventional Maharashtrian cuisine. The environment of Payatha gives an uncustomary experience, as gazals in the evening let you relish your single malt.

Aangan – The Courtyard Cafe:- Aangan The Courtyard Cafe is an ideal choice for open-air candlelight dinner, serving multiple traditional and continental cuisine. The venue is an absolute delight for all sort of get-together.

Kund – The Poolside Bar :- The most miraculous experience one can have in Fort Jadhavgadh is of Kund – The Poolside Bar, surrounded by hundred-year-old trees of Magnolia, Azadirachta indica etcetera. Interestingly, the designing of the pool was done 300 years ago, in such a way that it harvests the rain water.

The pricing of restaurants in Fort Jadhavgadh is around ₹1500 – 2000 for two people, considering the importance of this heritage, environment, facilities and ambience the price you pay for getting such luxurious services is simply worth it.

It has a total of 38 rooms and 12 tents that offers exclusive elegance and comfort, spread across 3 wings. The interiors of rooms have a combination of both old-world charm and modified stoned walls, having a contemporary luxury for pure fascination. All the rooms are facilitated with the convenience of modern time, out of 38 rooms some were used by the descendants of Pilaji Jadhav until the 20th century. Almost all the rooms share similar amenities that include mini bar, internet connection, plasma televisions, direct dial telephone and in-room tea/coffee maker.

The tariff of Fort Jadhavgadh varies between ₹ 6780 or up to ₹ 7910, though the prices may vary based on season and date of travels. 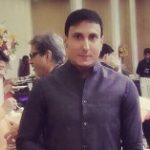 I wouldn’t blame you if you do not know much about Nubia; as it is still finding its feet in Indian-market. However, if you have
read more

10 Things Every Man Should Keep in His Office