We take a quick look at the spectacle unfolding between Trump and Clinton to consider what we can learn from the two hopefuls and what’s best left behind.

We’ve all been somewhat swept up by the US Presidential debate in recent weeks. Not a day goes by where we don’t confer over the desks about what’s happened overnight and the “Oh-goodness-what-has-Trump-done-now?” moments are flowing in thick and fast.

What it is not is a high-brow debate for the international stage. What it does offer us, however, is an accurate pastiche of some communication pitfalls. 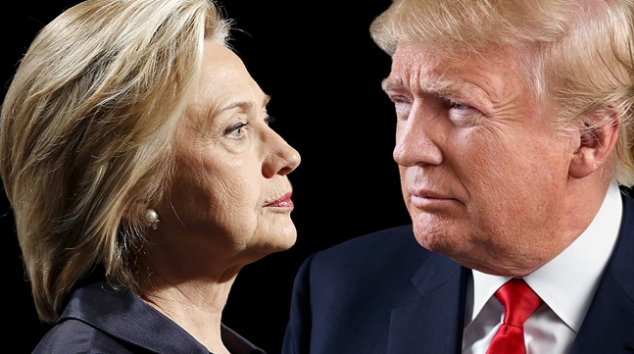 For arguments’ sake, I’ve been viewing the candidates as brands. They have a positioning, a visual identity, a USP and a purpose (of sorts). So, what can we learn from them from a brand communications perspective?

Be clear
Swiss-South African comedian Trevor Noah has produced a series on Youtube as part of his ‘The Daily Show’ entitled ‘Democalypse 2016’. In one of the clips, he sends out one of his pseudo-reporters to a Trump rally in Wisconsin to undertake an Ideology test with the supporters.

What then ensues is an eye-wateringly embarrassing few minutes of voters imbuing Trump’s potential presidency with their own meaning. Brand Trump could find themselves in hot water if they win votes on a series of misunderstood policies and statements.

So, lesson number one? Don’t let your own ambiguity and desire for brand differentiation get in the way of clear, accurate, easy-to-interpret communications. It could cost you dearly in the long run.

Be accurate
As is well known by now, digital communications and social media in particular are a different kettle of fish. The internet has a remarkable memory and its users have a penchant for dredging up the past.

As such, users have a real duty of accountability to their audience. If the press is to be believed, the Trump campaign had a PR army on standby during the Presidential debate, trawling through the campaign Twitter account to clear away any evidence of contradictory statements to what was being said live.

Inflammatory statements are best kept off the brand’s social media account. But, if you absolutely can’t help yourself, then be sure that you’d be willing to stand by it when consumers start touting it in 6 months’ time.

Be nice
Likened to a playground argument, the Presidential debate turned into a sledging match between the two parties. In our opinion, this really did neither side any favours. Truth be told, I’m still not even sure what either candidate stands for as a result of the dialogue.

Again, there’s a valuable lesson to be learnt here about brand communications. Channeling all of your energy in to mud-slinging with the competition does your brand image no favours.

Consumers want to buy into a brand because it has something to offer, not because it has made a point about how unworthy their competition is (here’s an example of Clinton’s campaign falling foul of this). Take Apple and Samsung as an example. When Samsung released a series of adverts that poked fun at Apple, it just left a bit of a sour taste. I want to know about their product and what they believe in, not see them picking holes in somebody else.

Find value and purpose in your own offer rather than piggy-backing on the misfortune of somebody else.

Be on brand
At the start of the blog, I mentioned how the Trump vs Clinton debate has become a battle of the brands. On the one hand we have Trump who is all about making America great again – the campaign website is all flags and patriotism. On the other side of the boxing ring is Clinton – a softer approach about inclusivity and moving forwards together.

One thing I would credit to both sides is their continued capacity to be ‘on brand’. Perhaps this is because the campaign brand communications have been retrofit to suit the personalities of each of their figureheads. Either way there is something compelling about both camps and I would credit their comms teams on creating online hubs that characterize the campaigns well.

The difference here is that Trump and Clinton are the pinnacle of the ‘brand’. Any communications are a mere extension of their personality. In a B2C or B2B business, you’re less likely to find this, though it’s not impossible. Consumers and customers like the element of accountability and we’ve increasingly seen the C-Suite under pressure to be very public brand champions. Take Mark Zuckerberg and Cheryl Sandberg, Tim Cook or Paul Polman of Unilever. They are expected to be a part of the brand’s communications and to embody the values in a very real and public way.

So, with that we’ve scratched the surface of the US Presidential debate and how we can learn from their communications. If you have any comments or ideas on what else we could learn, do get in touch – we’d love to discuss it with you.

May the best candidate win.

Have The Hottest Sex Tonight!

How To Get Better At Phone Sex!

Male grooming has been a crucial undertaking for centuries! For many, it may be for the simple reason of just wanting to look clean-cut, while
read more

Best Father’s Day Videos Ever Made

The In And Out Of Quickies